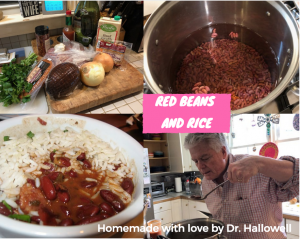 When I was in medical school at Tulane, down in New Orleans, back in the mid-1970’s, I learned how to make red beans and rice.

You may not think that sounds like much of a much, but it remains the dish more people ask me to remake than any other. Once you’ve had my red beans, you’ve just got to have them again.  My daughter insists that I freeze them and bring them with me to New York whenever I make them in our home outside Boston.  Our friends always ask, “When are you making those red beans again?”  They’ve become a staple at our Super Bowl parties and we always clean the huge pot down to the last bean.

The problem is, I have ADHD, so my “recipe” isn’t the kind of recipe people who follow recipes expect.  When I told my wife I was going to put my recipe for red beans and rice in our newsletter, she laughed.  “How are you going to that, honey?  You don’t have one!”

There’s some basics you do have to follow though.  That much I can tell you. So you never use canned red beans.  You might as well serve dog food and rice as serve canned red beans and rice.  Pure mush.  So you start with dried kidney beans.  I buy two and a half pounds because I always make a pretty large pot of my red beans, why else bother.  Sometimes I buy three pounds, even three and a half.  Then you need to soak your beans in water overnight.  They will plump right up so make sure you put them in a large pot and leave a good eight to ten inches of water over them for them to plump up into.

When you come down in the morning your beans will be looking out at you over the brim of the pot.  Now you drain them in a large colander and throw away any beans that look ugly.  You don’t need any fancier or more technical word than that.  Just throw out the ugly beans.  And keep all the rest of those plumped up proud little beauties.

Next, pour some olive oil into the bottom of the large pot that you’ve dried thoroughly (cuz oil and water don’t mix, don’t-cha know), and dump in a couple of chopped up onions and a chopped up large green bell pepper or two smaller ones.  After a while, when they become translucent, so you can sort of see through them, the onions and the peppers that is, but not entirely see-through, then throw in about ten or twelve cloves of chopped up garlic.  Now I love my garlic.  You can use less if you want to.  When it’s done you won’t hardly taste it anyway, I mainly put so much in for the aroma while I’m cooking.  Once all of that gets mingled and settled in, then you can dump in all those lovely red beans, and listen to them hit the pot like rain on a tin roof.

Now you hafta add some liquid quick, and you can pick whatever you want, I usually add some of that beef broth that comes in those cardboard quart containers, I put in about three quarts, and more later, but you can use water if you want to cheap out, or you can use a boullion cube, or whatever tickles your fancy, there’s no rule, but you do need some liquid right away.

I usually add a full bunch of flat leaf Italian parsley with the thick part of the stems cut off.  Then I take a three pound chunk of Black Forest ham and cut it into chunks and throw that into the pot, along with about seven or eight Andouille sausages cut up, and a couple of kielbasa cut up, and four or five Chorizo sausages cut up.

Now you add whatever spices you want, but low on salt because the ham will have it.  Bay leaves, oregano, thyme, pepper for sure, red pepper flakes (go light because you can add them at table), and whatever else moves you at the time.

Then simmer for hours.  Gradually the soup will thicken as the beans soften and a kind of gravy will come into being, a beautiful melding to behold and smell.  It is so delicious.  Taste as you go, modifying all along.  This is your creation, make it live.  There is nothing quite like making your very own red beans.

Play with it.  Have fun with it.  Enjoy! I would love it if you sent me your comments and photos. Send to drhallowell@gmail.com.