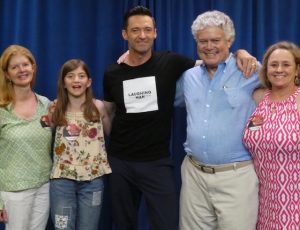 Recently my wife, Sue, and I, along with my niece, Molly, and her 11-year-old daughter, Josselyn, who dreams of becoming a star of stage and screen one day, went to see Hugh Jackman at Madison Square Garden. This is part of a five-month world tour in some thirty cities for this 50-year-old phenom who seems to get younger every year.
As we sat and watched his dazzling performance, backed up by a cast of over 150 musicians, technicians, dancers, singers, and stagehands, not to mention his beautiful wife, Deb, seated in the audience, whom he serenaded in the sweetest, most romantic moment you’ll ever see in a live performance, I had to wonder not only at the huge talent of this man—his range, from song to dance to stage to screen to drama to comedy to variety—but to the extraordinary goodness of him as well.
The theme that ran throughout the two hour show was a full-on celebration of life in all its dimensions, in all its variety, in its total and glorious diversity. Out came Keala Settle to sing a searing rendition of the song “This Is Me” which she made famous as the Bearded Lady in “The Greatest Showman.” It includes the lines, “When the sharpest words wanna cut me down, I’m gonna send a flood, gonna drown them out, I am brave, I am bruised, I am who I’m meant to be, this is me.”
How much Hugh Jackman understands and loves all this, loves differences in people, how much he celebrates it in the show he put on that night—and night after night around the world—as well as his wish to bring all people, no matter who, together. He said, “When I was in Minnesota, they taught me a new term, LGBTQA. I said I knew about LGBTQ, but what’s the A? They said it stands for ‘Allies’. I said, Great, because I’m an ally for sure. Now we have a term that includes everybody.” But then he went on to add, But when I got to New York, they told me, “Oh, no, Hugh, the ‘A’ stands for ‘Asexual’. Well, I’m not asexual, but I am an ally for sure!”
Hugh is an ally indeed, an ally of us all, a man who, along with Deb, applies his tremendous talent and resources to unite people, spread understanding and good will, raise spirits, and fill people’s lives with song, laughter, and love.
He’s a friend to our cause as well, the cause of invisible differences. Those lyrics from “This Is Me” could just as easily come out of the mouth of a person who has ADHD or dyslexia as out of the mouth of a woman who has a beard or a man who’s mocked for being short, fat, or funny-looking.
As I sat there in Madison Square Garden, being moved to laughter and tears by the World’s Greatest Showman I thought to myself how wonderful it is that God gives us a Hugh Jackman to offset the guttural voices of hatred and division, of ignorance and bigotry and scorn, that God gives us a Hugh Jackman to inspire us as he tours the world tirelessly raising hope every night, lifting up the people who can’t see the stars.
As I listened to his resounding voice and marveled at the light step of his dance, I knew that this man who was once a little boy in Australia watching Fred Astaire and Gene Kelly on TV, had been plucked up by the spirits that look out for us all and sent on a mission, a special World Tour, in which he was to put to rout the evil-scaled demons and dragons that kill people’s dreams and replace them instead with this shining star, this astonishing Knight in Red Circus who cast a spell upon us all, from little Josselyn sitting next to me, her mouth agape and her eyes as open as her heart, to the entire hurting and waiting world, if it would only listen.