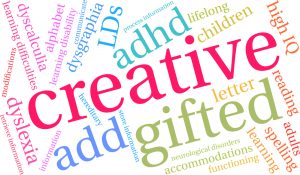 ADHD (attention deficit hyperactivity disorder) is a misleading name for an intriguing kind of mind. ADHD is not so much a disorder but rather a collection of traits and tendencies – some positive, some negative – that define a way of being in the world.

If the negative aspects become disabling, then this way of being in the world can become a disorder. But once people learn to manage the negative, disorderly aspects, they can take full advantage of the many talents and gifts embedded in this sparkling kind of mind.

Having ADHD does not mean having a slow brain or a brain that cannot focus. In fact, it’s quite the opposite. When you have ADHD, it’s actually like having a turbocharged race-car brain that goes much faster than other brains. You brain is constantly taking in a lot of different stimuli. By learning to follow certain specific steps, you can take advantage of the benefits ADHD conveys – while avoiding the disasters it creates.

Unwrapping the Gifts of ADHD

People with ADHD have special gifts, but they are sometimes hard to unwrap. The most common of these gifts include:

At The Hallowell Center, we focus on identifying and unwrapping these gifts.

Many people ask what the difference is between ADD and ADHD.

When ADD is accompanied by hyperactivity, it is referred to as ADHD (attention deficit hyperactivity disorder), but the terms are often used interchangeably.

ADHD is the more modern term and is used to describe the condition both with, and without, hyperactivity. But ADD (Attention Deficit Disorder,) the old term, is still used by many clinicians. Whichever term you use, the important thing to know is that you can have ADHD (or ADD) without showing any signs of hyperactivity or impulsivity whatsoever.

“People with ADD have special gifts, but they are sometimes hard to unwrap . . . originality, creativity, charisma, energy, liveliness, an unusual sense of humor, areas of intellectual brilliance and spunk.”

Curse or a Gift? Learn more in this CHADD article on when Dr. Hallowell met Dr. Barkley.

If you think you or someone you know, may have ADHD, click here to learn how The Hallowell Centers can help.